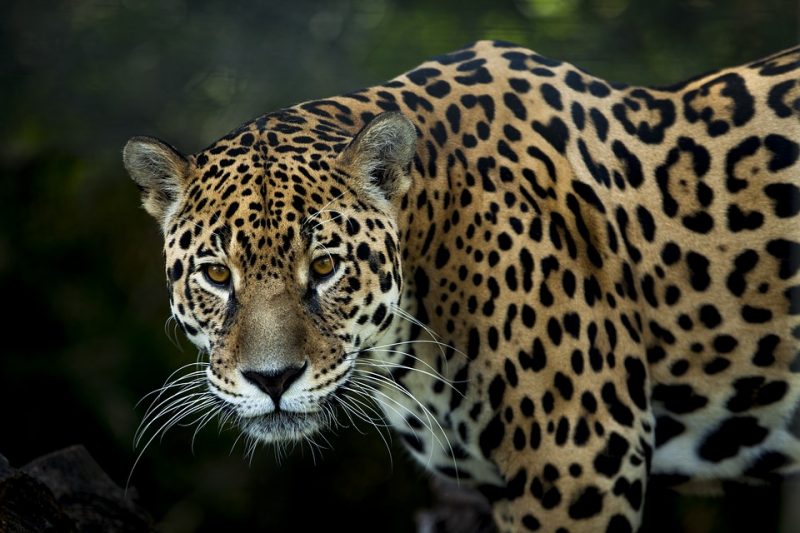 The Cockscomb Basin Wildlife Sanctuary in Belize is a safe haven for the jaguar, which is still considered endangered. The sanctuary encompasses roughly 128,000 acres of jungle and rainforest in the Maya Mountains Cockscomb Range. The Bladen Nature reserve also sits just to the south, which gives the endangered jaguars over 250,000 acres to roam without having to worry about poachers. This makes Belize the top spot for jaguar populations in the entire world.

If you’re traveling to Belize and want to catch a glimpse of a jaguar, then you need to book an evening guided tour. Night hiking through the jungle will give you the opportunity to see many nocturnal animals, including the jaguar. If you’d rather stick to day-hiking, then there’s still plenty to see. Tapirs, pumas, ocelots, margays, deer and peccaries are all active during the day. Birds are also extremely plentiful in the Cockscomb Reserve. Over 300 different species call the area home, including the King Vulture, a number of hawk species and the scarlet macaws as well.

Getting to Cockscomb Basin Wildlife Sanctuary starts with taking transportation such as a bus or taxi to the sanctuary entrance. After paying a small entry fee, you can enter the sanctuary. If you’re driving, you can take the Southern Highway roughly 20 miles to the south of Dangriga. In order to see the most wildlife in Cockscomb, you will need to hike deep into the forest. Make sure to bring comfortable shoes, wear long clothing and pack plenty of bug spray.

What else can you see in Cockscomb besides wildlife? Plenty! The scenery in Cockscomb is also amazing with mountain peaks, huge waterfalls and scenic trails. Cockscomb wasn’t just established to protect wildlife, but also to protect the upper river watersheds. There’s only a small sliver of land that separates the basins of the Swasey and Monkey rivers. The complex river system supports the people of Belize as well as its abundant wildlife.

The sanctuary was established in 1986 after the government decided that more needed to be done to preserve the land. Initially, the land was set aside only as a no-hunting reserve for the jaguars.

Mariposa Beach Resort is one of the best places to stay in Placencia with its beach view suites, ocean view dining and unique private treehouses. It’s especially great for those who want to explore the nearby Cockscomb Basin Wildlife Sanctuary in Belize.